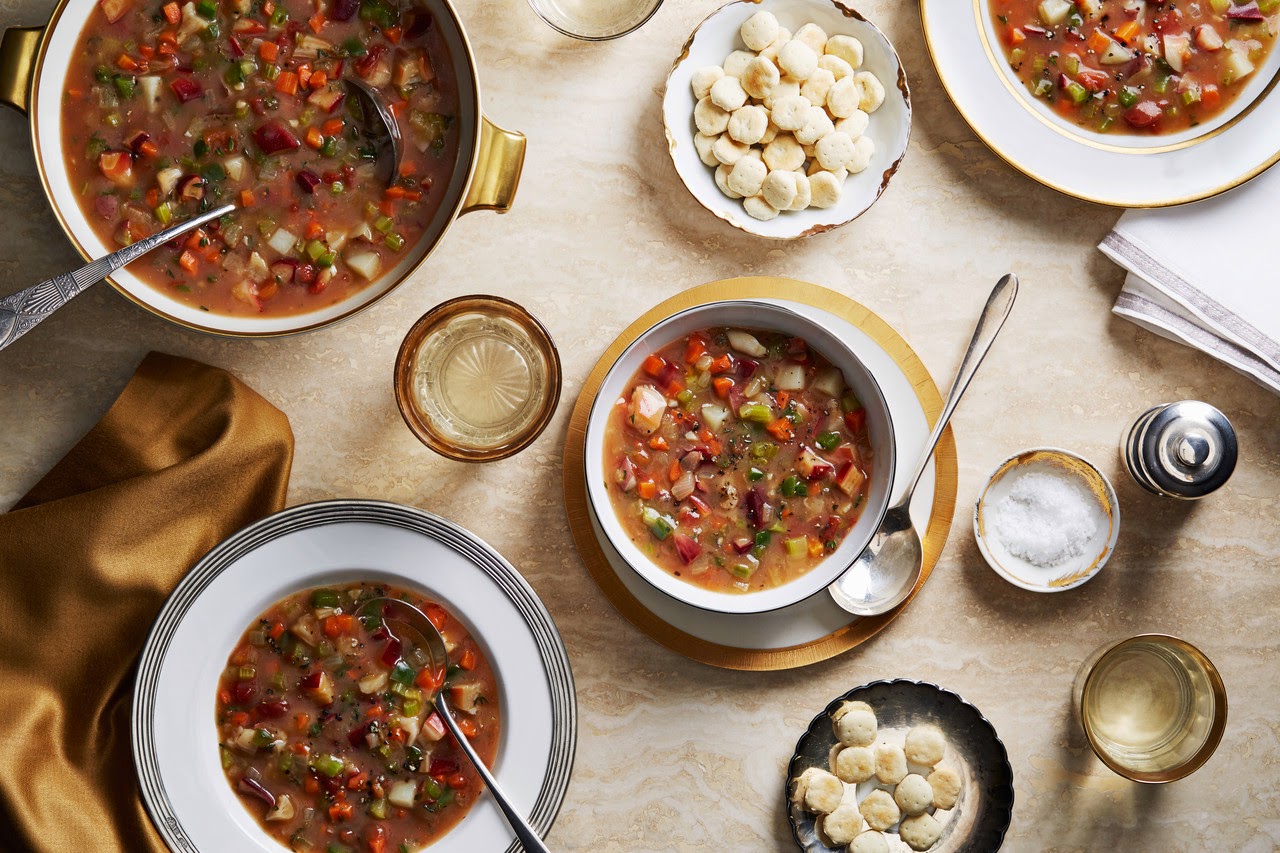 A bowl of Manhattan clam chowder carries a restaurant critic back to the place where he found his palate: the Grand Central Oyster Bar. Here’s the recipe he’s perfected over the years at home

By Alexander Lobrano in the Wall Street Journal

HIDDEN AWAY in the limestone catacombs of New York City’s Grand Central Station is the gastronomic chronometer that measures out my life: the Oyster Bar. Ever since I’ve had a memory of having memories, the restaurant has played a part in my epicurean education.

This recipe requires fresh clams. Their briny juices temper the acidity of the tomato broth.

Total Time: 1 hour Serves: 6
1. Heat oil in a lidded soup pot over medium heat. Once hot, add onions, celery and green peppers, and cook until tender, about 10 minutes. Add clams, cover pot and cook until clams open, about 5 minutes. Use tongs to remove clams from pot, discarding any that did not open. Shuck clams and set meat aside; discard empty shells.
2. Add potatoes, tomatoes, tomato purée, 3 cups water and wine, and let simmer until potatoes start to soften, 5 minutes. Add clam meat and simmer until clams are cooked but still soft, 3 minutes. Add thyme, parsley, bay leaf, pepper and cracker crumbs, and simmer until parsley wilts, 5 minutes more. Whisk in butter, then season with salt and pepper. Discard bay leaf before serving.
—Adapted from “The Grand Central Oyster Bar & Restaurant Cookbook” by Sandy Ingber with Roy Finamore
I often choose this place for my first jet-lagged lunch when I return to New York, the city I left for Paris some 30 years ago. The Grand Central Oyster Bar still feels like home, and never more so than with a bowl of poppy-colored Manhattan clam chowder in front of me. This soup is distinguished from the thicker, creamy-white New England version by its tomato-based broth; my Boston-born mother would consider the very writing of this article seditious. Yet the satisfying, soft crunch of chopped celery in the Oyster Bar’s Manhattan clam chowder brings back her sincere suburban cooking from my childhood in Connecticut, just as the faint whiff of bay leaf recalls the aftershave used by my father, who transited Grand Central twice daily for decades. For reasons as rich and muddled as any good chowder, I yearn for this soup from one consoling bowl to the next.
With old-fashioned marquee lights lining the arches of its low vaults, and tables dressed in jaunty red-checked cloths, the Oyster Bar has always been reliably festive, at least since 1974, the year the faded restaurant reopened following a renovation. Before that makeover, it was the kind of place frequented by people who might politely be described as creatures of habit. Maybe a lone bachelor enjoying a Rob Roy or three with some lobster Newburg over a crossword puzzle. Or a handsome but melancholy older woman waiting for a train back to Chappaqua, sipping Sherry and smoking Parliament cigarettes over an almost untouched plate of salmon in green sauce as she absentmindedly watched her two blonde grandsons—here’s where I enter the picture—sawing away at their Salisbury steaks (mercifully no longer on the menu since the Oyster Bar went basically all-seafood in 1974).
The old Oyster Bar was about the food America ate before it became interested in food. Then the restaurant, along with the country, got a bigger and better appetite. Often I’ll sit at the counter for a meal that’s expedient but inflected by the charm of serious waitresses. (These nice ladies aren’t biding their time until a second audition on Broadway.) On a swivel stool, I always go for the clams—Manhattan clam chowder and then the fried-clam sandwich. In the sit-down dining room, I’m more promiscuous. There I’ll let myself be tempted by oysters—their list is terrific—and then the chowder, or the chowder and the dish I order every other year to remind myself not to order it again: the fried coconut jumbo shrimps with coconut rice and pineapple, the awful faux-Polynesian thing I used to order before I learned to love real fish.
I suffered a childhood aversion to seafood, which is why it’s easy to plot the evolution of my appetite against the menu of the Oyster Bar. It was one of the key places where I shed my timidity at the table.
You might say it was the chowder that hooked me. The pivotal bowl came in the late ’70s, during a lunch with an elegantly leonine friend of my grandmother’s, a distinguished retired book editor I hoped could help me get a summer job. “One way or another,” she advised, indelibly, “if you want to work in publishing, you’ll have to be very good at doing lunch!” She ordered the Manhattan clam chowder, so I did, too.
I was apprehensive while we waited, but when the chowder came to the table, it looked pretty much like a nice tomato soup. It wasn’t. To my surprise, the clams goosed it up into something racier, their chewy meat adding bite to the bowl and their juices a delicious undertow of the sea. It was delicious.
I didn’t get that summer publishing job, but I have since become very good at lunch.
Posted by just a marine at 3:32 AM